Servicom (Service Compact with All Nigerians) was born on 21st March, 2004 immediately after a special presidential retreat on service delivery was concluded by the then President Olusegun Obasanjo. The compact’s core provision says: “we dedicate ourselves to providing basic services to which citizens are entitled: timely, fairly, honestly, effectively and transparently.”

SERVICOM in FMC, Keffi started with the setting up of a five man committee to formulate the Hospital service charter following a directive by the Federal Government of Nigeria on the 17th of August, 2004.

By January 1st, 2005, the pioneer five members SERVICOM committee headed by Mr. Abiodun Amudipe (Rtd.) was inaugurated. This committee was first restructured on the 27th of September, 2006 and has continued to be restructured from time to time since then.

A SERVICOM Compliance Evaluation Visit by the staff of SERVICOM office (Presidency) was carried out on the 3rd of July, 2006. The result of that evaluation which was presented to us on the 4th of August, 2006 revealed that Federal Medical Centre, Keffi scored 1.5 out of 4 i.e 37.5% which ranked the hospital a 2 star service centre(fair).

All of us are withnesses to the dramatic changes that occured at our GOPD. Suddenly, FMC Keffi became known nationally. The then Head of GOPD, Dr. Joshua Giyan even delivered a lecture on GOPD process in faraway Ghana and it was received with acclamation.

The Keffi model was later chosen for Roll-Out in all Federal Health Institutions across Nigeria. The then Nodal Officer Mr. A.A Abiodun (RTD) was included in some of these Roll-Out tours. Visitors started coming from far and wide to see the “FMC, Keffi magic”. Among those that visited were:

i. The Cross River State Government

They came to see what happened in Federal Medical Centre, Keffi that everybody is talking about – THE GOPD PROCESS. But did we meet their expectations?

Most of them expressed delight in what they saw; though, one or two expected to see fantastic structures in place. But we told them that what makes the work to run smoothly is the PROCESS.

The structures help but that is secondary. Also, we told them that most of the achievements were not as a result of big funding.

In August, 2011, the then (Ag.) Medical Director (Dr. Giyan) who later became the Medical Director/Chief Executive created and commissioned SERVICOM as a full Unit under his Office and Staff from other Units were posted to SERVICOM as Part-Time Staff under the pioneer Nodal Office Mr. A.A. Abiodun (RTD) on 30th January, 2012 for better service delivery. A new Nodal Officer in person of Mrs. Christiana O.B. Shiaki (JP), DNS was appointed to take over the running of the unit with the pioneer NODAL Officer serving as the Special Adviser to the Medical Director on Service Delivery (an office created by Dr. Giyan) until the expiration of his tenure/service in 2017.

On the 13th April, 2016, the name “SERVICOM UNIT” was later re-designated to “SERVICOM AND REFORM UNIT” by the Federal Ministry of Health through a circular received from the Head of Administration, Federal Medical Centre, Keffi to drive development initiatives and services to its customers.

The benefits of having the “REFORM” component incorporated and made functional according to FMOH, includes:

i. Evolving concise reform issues for the sector by health institutions and the supervisory Ministry

ii. Forestalling duplication of responsibilities among Institutions and Agencies in the health sector.

iii. Facilitating the development of policy direction for the sector by the Federal Ministry of Health

iv. Full implementation of any introduced health reform by all the relevant institutions and agencies.

On the 20th of November, 2017, the SERVICOM Compliance Evaluation Team from the presidency arrived FMC Keffi on a one day working visit. The aim of the visit was to evaluate hospital compliance with SERVICOM standard in Health Care Service Delivery and Customer Care Policy. SERVICOM criteria form was used as the tool for assessment.

After the evaluation exercise, a presentation of evaluation result of four Federal Hospitals (FMC Keffi inclusive) to the Hon. Minister of State for Health (Dr. Osagie Ehanire) was organised by the National Coordinator of SERVICOM and was held in Federal Ministry of Health, Abuja on the 28th of March, 2018. The post-evaluation result showed that the hospital (FMC, Keffi) have successfully carried out more than 70% of the recommendations of SERVICOM in their first evaluation assessment. And interestingly, the result was the best post-evaluation result among the three Federal Institutions assessed.

On the 13th May, 2018, a new Medical Director/Chief Executive (Dr. Yahaya Baba Adamu) took over the mantle of leadership after the expiration of the tenure of the former Medical Director. Dr. Yahaya within a short period of his stay asked the Unit to introduce measures to curb Staff negligence towards their duties especially in the areas of late coming, closing before official time and absenteeism. The Medical Director later introduced the use of Biometric Time Attendance Management System as a tool for monitoring the punctuality of staff attendance to work in October, 2018. 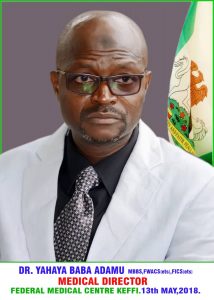